Our special guest joining us today for coffee and crafts by the beach is another “Featured Author” for the upcoming Coastal Magic Convention, Kiernan Kelly.  I’m so excited she accepted my invitation to join us today.

Kiernan’s a very gifted author and crafter and has come up with a very special craft project to share with us later.

For now, let me tell you a little about this creative lady. 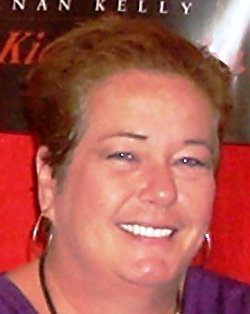 Kiernan Kelly lives in Florida among the alligators and palmetto bugs with her husband and a Shar Pei-Labrador puppy who thinks she’s a person (the dog, not Kiernan. Kiernan knows she’s a person. At least, she is after she’s had her daily dose of caffeine).

Her stories of gay romance envelop diverse themes, varying from paranormal to fantasy, and science fiction to contemporary romance, with thirteen novels currently in print and ebook, and over sixty shorter works available in both mediums. She has published with a variety of houses, including Torquere Press, Dreamspinner Press, MLR Press, Loose-Id, Starbooks Press, Cleis Press, and Circlet. Her horror short story release, “Cletus,” appears in the Coscom Publishing’s book “Bits of the Dead.”

You can also find Kiernan on the brand spanking new Evil Plot Bunny website. Today is it’s debut so be sure to go by and check it out.

Last chance to get your ticket for the full weekend is January 20th.

Kiernan shows us her contribution in the three-person project she and fellow Club Raven authors, BA Tortuga and Julia Talbot are creating to be raffled off for charity at Coastal Magic this February.

BA Tortuga and Julia Talbot will be joining me later this week with their contributions.  I can’t wait to see what they do.

Tony Brazzio, co-owner of Club Raven, Baltimore’s premiere men’s club in 1875, has a pocketful of cash and a chip on his shoulder. He’s out to prove to his co-owners — and himself — that he’s not a fluke, that anyone can be successful give the opportunity, no matter how poor his beginnings.

Bull O’Brian and Dandy Gilroy are two hoodlums from the rough streets of New York’s Five Points. They’re pickpockets by trade, and both possess psychic talents that make them two of the best. When Tony offers to bring them to Baltimore and give them the chance at a life of riches in polite society, they jump at the chance, if only to steal the members of Club Raven blind.

The best of plans rarely work the way they’re intended, and things swiftly go from bad to worse for Dandy and Bull. There’s murder afoot and a detective on their trail, and not even copious amounts of hot, sweaty sex can ease their fear or guilt.

As for Tony, he’s faced with admitting his experiment is a failure, something he’s loathe to do. It’ll take a great deal of persuasion, a little luck, and a lot of lube to make sure his plans for Dandy and Bull become more than just wishful thinking.

Tony sat on a stool in Club Raven’s huge kitchen. A plate piled high with fragrant spaghetti Bolognese sat in front of him, accompanied by another dish holding an array of meatballs, sausage, and braciole. He held a tiny saucer full of grated cheese, and drizzled some over the top of the spaghetti with a delicate silver spoon.“Mama, it smells delicious.”

A very round woman hovered nearby. She wore a black silk faile mourning dress, and a long white apron. Her only jewelry was a simple gold wedding ring, a broach fashioned from human hair that was pinned to her ample bosom, and a pair of black rosary beads she kept in her apron pocket. Her gray-streaked black hair was neatly braided and pinned into a coronet encircling her head. She flicked her fingers impatiently toward his plate. “Si, si. Mangiare.”

Tony chuckled. “Si, si. I’m eating, Mama. You’re going to make me fat.” He twirled his fork in the pasta and lifted it to his mouth. His eyes closed in near ecstasy at his first taste. Nobody cooked like his mama. It was why he brought her to Club Raven as his private chef. She had a nice little apartment behind the kitchen. This way he could see to her needs, and didn’t have to worry about her living in Five Points, but she could still feel useful.

“Perché hai portatoquei due ragazzi irlandesi qui?” She made the forked sign of protection with her fingers. “Sono problemi.”

“I know the two Irish boys are trouble.” He smiled at her, then speared a piece of sausage on his fork. “I need to make them respectable. Rispettabile, you understand?”

“I won’t get myself in trouble, Mama.  I told you—I’m one of the owners in this place.” He shook his head. Mama just couldn’t believe that her son, poor little Anthony Brazzio from Five Points, could co-own a magnificent building like Club Raven. It was as if Mama spent her days with one eye always looking for the trouble she was sure was coming. “I admit, though, I’m wondering if maybe I made a mistake bringing them here. They’re up to something, I can feel it.”

You can also get it from the Evil Plot Bunny website which offers a variety of book formats.

Come join us at the Coastal Magic Convention, this February in Daytona Beach. It’s going to be an absolute blast. #CMCon2017

Don’t miss your chance to meet over 50 fabulous urban fantasy, paranormal, and romance authors at Coastal Magic next February! This super casual book-lover weekend happens on Daytona Beach and gives everyone the chance to hang out with fellow readers and amazing storytellers.

REGISTRATION is open until January 20th! If you haven’t been to Coastal Magic yet, you’re missing out on a lot of fun.  Be sure to keep up with all things Coastal Magic, by following it via your own personal social media drug of choice:

Thanks for joining us today, Kiernan.  I look forward to seeing you in Daytona come February.

For those that can’t make the convention, you can still join in the fun by joining our 2017 Featured Authors Reading Challenge.  It’s open to everyone.

Thanks to everyone who joined us today. I always want to know what you think.

What do you do with the swag you get from conventions and book signings?  Have you ever used them in a craft?  Please feel free to leave a comment and a picture of anything you’ve made with some of your author swag.
.