So cool.  The winning picture was posted on the day I hosted.
Click on the link below to see which picture won.

July will be here in a few hours, and General Registration for the 2018 Coastal Magic Convention will be OPEN!

Welcome to Tuesday Tales, a weekly blog featuring diverse authors who post excerpts from their works in progress based on word and picture prompts. We’re a book hungry troop that enjoys reading as much as you do. Our picture today came across to me as a hall lurker. My excerpt is from a horror flash…

Originally posted on A Writer’s Path: ? by J.U. Scribe My free book promotion for Before the Legend is officially over as of this week. What was supposed to be a “Free Promo Week” turned more into a month long promo filled with free print giveaways, author interviews, guest spotlights, and of course free eBooks! It was…

SYNOPSIS Kai has been hunting for his mate for a very long time. Drawn to a singular place on earth, filled with treasures, he still seeks the greatest treasure of them all. His mate. Fleeing danger, Connie runs into the arms of destiny, but she has plans already, and a Dragon mate is not on […]

Fun yet intriguing read. And Hot! Definitely hot! Phew, I’m still fanning myself while trying to recover from the shock of the surprise ending. Totally caught me off guard. Wow! Way to go to the author.

Sylvia and Braxton’s story flowed well, as the intrigue and romance increased in a balanced dance of chemistry and tension. I quickly became infested in both the characters. I would recommend this book to my friends and fellow shifter lovers.

Disclosure: I was given this ARC in exchange for an honest review.

Sylvia Schneider loves her some Navy SEALs, but only the ones she creates digitally for the video game she’s producing with Noah Wright. Devastated by the death of her military fiance, she hasn’t dated in two years, much less left her apartment. But when Noah asks her to introduce the new game at a convention in Vegas, she’s forced out of the house and her shell. To top off her already building anxiety, she’s been getting nastygrams from someone claiming she stole their game design. Threats on her life send her to Gerri, owner of the Paranormal Dating Agency, for a shifter bodyguard. Sylvia is adamant that it’s just for the weekend, and just for an escort, and not that kind of escort.

Braxton “Brawn” O’Brien was the runt of his pack. He left home to make a name for himself as a Navy SEAL, where as even the smallest wolf, he towers among the humans, using his preternatural abilities to save lives. But lately his wolf side has been battling anger issues, and the rage inside him cannot be quelled. He’s forced into medical leave to figure out what the problem is, or his military career is over.

When Gerri hooks Braxton up with a bodyguard gig while on leave, he hopes she can also find him a mate to satisfy the beast roaring inside him. One look at his charge, Sylvia, and he knows she’s the one. The problem is then convincing the spunky, yet shy human of the same. When the threats on her life turn into attacks, Braxton will hunt until his last breath to keep his mate safe. But Sylvia’s got secrets of her own, that may make or break the mating bond.

Wren hails from the frozen tundra of Wisconsin where beer and cheese are their own food groups. But a cowboy swept her off her feet and carried her below the Mason-Dixon line to Texas, where she promptly lost all tolerance for cold and snow. Fueled by coffee, dreams, and men in kilts, Wren promises to bring you laughter, sexy fun time, and action that keeps you on the edge of your seat. The easiest way to her heart is anything to do with the Green Bay Packers, Doctor Who, or Joss Whedon.

Check out the spectacular line up for #CMCon18! 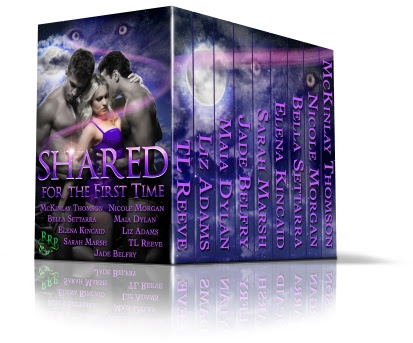 Source: Shared for the First Time-LOVE & MAGIC BY JADE BELFRY

Originally posted on WRITING MOJO ACADEMY:
One word after another, that’s how you write a book. There is a lot more to it than that, of course, but getting a decent amount of words down on paper or screen is…